Where they were and what they said:

* Gilles Duceppe was in Lebel-sur-Quevillon early in the day where Domtar is closing two paper mills. The TV clips ("We'll never abandon you") were just the right tone. You wanted to believe him. Later, he visited Kitcisakik, an Algonquin community that has no running water nor electricity (despite behing relatively near a huge hydroelectric dam). Duceppe is believed to be the first political leader to visit, ever.

* Stephen Harper pledged $50 million per year to the Canadian Strategy for Cancer Control and got kicked for his efforts: 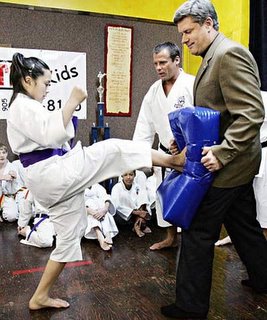 "That looked tough but I get that from the media every day," Harper quipped.
Last night, he was in Mississauga, introduced by Ontario Conservative party leader, John Tory (you can't invent this stuff) to present his GTA program. He also used the occasion to laud Jean Charest (attempting to drive a wedge between federal and provincial liberals in Quebec, maybe?)

* In the words of quasi-comic Michel Beaudry in Le Journal de Montréal, "Layton and Martin each gained one percentage point yesterday; they took the day off." (Ka-tching.)

* The NDP researched the "ordinary Canadians" in the Liberals' ads. Turns out they're not.

* Latest SES-CPAC rolling poll (taken Friday) tells us that Conservatives rose by 4%, NDP down 35%, Libs down 2%, Bloc and Green unchanged. Liberals' lead down to 9%.