No word has been looked up more often this year in Merriam-Webster's Online Dictionary.

This is a minuscule story in the US but a huge one up here. 24-hours news channels are covering this intensely.

Anyways, since Canadians are generally anti-Bush (the same way most countries around the world are) they're preparing a pretty important protest in front of the federal Parliament.

This is a picture that was saved a couple of hours ago. 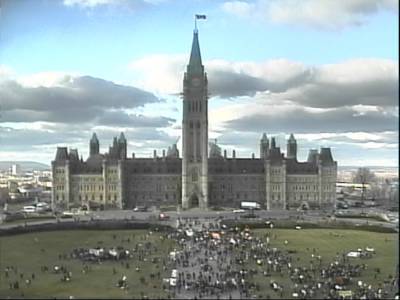 The CIBC screws up (IMHO)

The Globe and Mail tells us this morning that a whole bunch of PR/crisis counselors agree with me that the Canadian Imperial Bank of Commerce (commonly known as CIBC) is screwing up it their treatment Wade Peer, the scrap dealer in West Virginia that received all that confidential information.

At least the headline is amusing.

Do you think you are at risk of losing your job in the next year? 28% of Canadians say yes.

Out of the 18 countries Right Management Consultants surveyed, we're 16th on the optimism scale (only Hong Kong and Germany fare worse).

How about them apologies?

The UK edition of PRWeek writes about it, so do Robert Scoble and Shel Holtz.

Earlier this week, I blogged about Nortel. In said post, I wondered if Nortel would file its numerous late fillings on time in mid-November as promised.

Well, now we know: no, they can't. It'll be sometime in the next 30 to 60 days, or so they say. Like I'm going to believe anything they say.

Shame on you Nortel.

Tell us what you really think there Rupert.

Let me start over. Rupert Goodwins is a columnist at ZDNet UK. In his latest comment, he skewers a PR agency for sending out a media release printed on a t-shirt. Yes that's right, printed on, not accompanied by.

We' ve had some daft things through the post here.

(Note: that means the mail.)

A couple of years ago around this time, we got a set of loose fireworks as part of a PR campaign. We're not sure how legal that is -- oh, who are we kidding, we know exactly how illegal that is. But the office is festooned with cuddly chameleons, stuffed penguins, comedy hats, half-empty bottles (they don't stay that way for long), novelty mouse mats, novelty mice, half-full USB key drives (this year's toy of choice) and many other PR gizmos ranging from useful to tasteless.

T-shirts are a perennial favourite. The best ones are big, black and have discrete logos -- which is why most of them are small, white, festooned with ugly designs and useful only as underwear. However, I have in front of me what must be the least good idea in promotional T-shirts. Ever.

The least good idea? (How about the worst idea?) Anyways, does anyone know any worse idea in promotional t-shirts?

"This is the Way. This is Nortel."

By way of Business Wire, we learn this morning that Nortel has:

If I can be very clear about what I think of this initiative, this is stupid.

Couldn't you guys start by getting your financial act together? You still haven't restated your 2001 results! To say nothing, obviously, about every other result since. Just last month, you had to announce, with significant egg on your face, that you would "not be in a position to file financial statements by the end of October 2004 as previously announced."

"The Company now expects that it and NNL will file, in mid November 2004, financial statements for the year 2003 and the first and second quarters of 2004, and related periodic reports."

We'll see next week what comes of it.

Credits for the campaign go to The Richards Group out of Dallas.

From Doc Searls in The New Florida:

(To) the heartland, Bush is Reagan. The vast red states are more than metaphor. They're the country. The intellectuals — including, I would guess, most of us here in the blogosphere — are the fringe. We're a minority that did about the best it could do, considering. We tried to "take back" the country. But it wasn't there for the taking.

“We feel strongly that our pre-election polls were accurate on virtually every state. Our predictions on many of the key battleground states like Ohio and Florida were within the margin of error. I thought we captured a trend, but apparently that result didn’t materialize.

“We always saw a close race, and a close race is what we’ve got. I’ve called this the Armageddon Election for some time—a closely-divided electorate with high partisan intensity on each side."

And that, my friends, is spin.

Anything to learn about the election

The New York Times writes that Advertisers Learn From Candidates.

The takeaway (also applies to PR):

Frontline, PBS's flagship public affairs show is presenting "an in-depth look at the multibillion-dollar "persuasion industries" of advertising and public relations and how marketers have developed new ways of integrating their messages deeper into the fabric of our lives" and not one PR executive accepts to go on the program!

Kevin Roberts, CEO of Saatchi and Saatchi Advertising, Doug Atkin, of Merkley + Partners, and Naomi Klein are all part of the piece that'll be aired November 9th. News release is here.

Thanks to Jeremy Pepper who got it from O'Dwyers.

Be careful what you wish for. What most marketers haven't come to grips with is just how much consumers are now calling the shots. They have the ability to change the way ad messages are being received -- and even come out with their own counter-messages.


Well, he is right. Most marketers haven't come to grips with how much consumers are calling the shots. Maybe it's time they wake up and smell the coffee.

Okay, this is a funny news release.

Seems that the Florida storms, the California rains and the Mexican pest oubreak have conspired to raise the price for fresh tomatoes so much so that some people out there think there might be a shortage some time soon.