Yesterday, Stephen Harper promised to raise the pension income amount from $1,000 to $2,500 per year (a conservative classic) and to create a "Seniors Council" to advise the minister responsible for seniors (which certainly isn't; aren't they in favour of less bureaucratic structures, not more?)

Paul Martin used Bill Clinton as a prop. (Something tells me Bill didn't like that all that much.) The PM's strategy seems to be to try to move left, not by attacking the NDP, but by attacking über-rightie George Bush.


Jack Layton made it into the news today for saying that we should stop sending troops to Afghanistan, then by reversing that slightly.

The latest CPAC-SES nightly tracking poll (completed December 8, 2005) has the Libs going up 1% and all others staying unchanged.

And lastly, a picture: 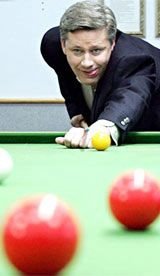